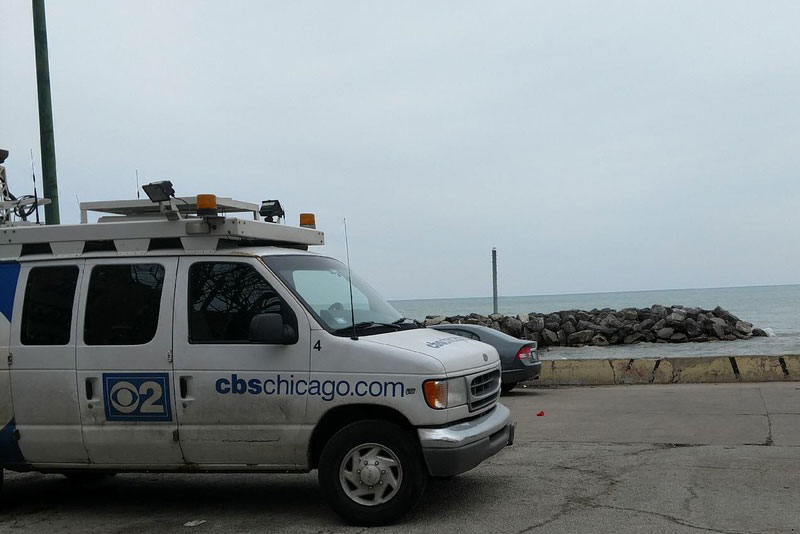 At our Passover celebration Saturday night, I announced to my son’s soon to be in laws (who I’m just starting to get to know) that the next day was one of my three favorite holidays.

They looked at me incredulously.

“You mean that you, a Jew, appreciates Easter?”

“No,” I responded. “I love April Fools Day! That, along with Presidents Day and my birthday are my three favorite holidays of the year.”

This year I was thrilled that a group of friends agreed to brave a wet, cold and windy Saturday morning to participate in my hare-brained April Fools scheme.

I had the idea around two months ago when Trip Advisor sent me a marketing email: “Trip Advisor’s List of Top 25 Beaches in U.S.”

“Hmm,” I thought. “We should place a photo of one of our local beaches in this list as an April Fools gig.”

A month later, when web designer and friend Walt Kennedy and I discussed re-launching this website, I had only one condition: that we re-launch it on April 1, with this joke in mind.

I told Walt: “The key is that we get a bunch of people dressed up in summer attire doing outlandish stuff. Don’t worry,” I comfortably asserted. “I’ll get the people!”

Sure enough, this past week I invited a group of friends, neighbors and tenants - folks who live nearby who I thought would ‘get it,’ yet given Saturday morning’s awful weather conditions, I had reason to doubt whether folks would show.

At 10:45 AM, our designated meet up time, only my neighbor Jim was out there waiting - clad in his summer gear, smoking his trademark cigar.
“The wheelchair is over there,” he pointed.

An hour earlier, Jim enthusiastically embraced my idea that we place a Sister Jean look a like in the shot, and he agreed to bring down his wheelchair for us to use. A half hour later, knowing we had a wheelchair, I then rushed over to Lost Era’s Antique and Costume Shop where I picked up a nun costume. The store’s long term owner, Charlotte, was super enthused and glad to help out.

Back at the beach, my cousin Boomer shows up, new pup in tow, ready to join us in the photo. I told Boomer that we had all of the essentials to place Sister Jean in the photo - but who would be play the part?
Boomer smiled. “If no one does it, I’ll do it.”

A burly, beer loving 38 year old Jew playing the role of a 98 year old Rambler Chaplain? “This is going to rock!” I thought, starting to believe it.
In time Alderman Moore appeared, attired in a combination of beach and Rambler attire. I made him give up his Loyola scarf (for Sister Boomer Jean to wear), and soon he was joined by his good friend and staff member Wayne, also dressed for the part.

Then, joined by Clayton and Kimberly, all properly attired, who started playing beach ball with a red stuffed animal I had purchased earlier in the day. Then, a neighbor (and friend of Jim’s) with a parakeet who I didn’t really know, and still don’t know and her friend showed, ready to be photographed, as did even an Edgewater resident, Andrew, who is starting a new North Side amateur soccer club.

There was some confusion as to who would stage and take the photo. Days earlier I had asked Heather, a neighbor and friend and local graphic artist who has doctored other photos of mine to stage and take this shot. Yet, I also invited another neighbor, Michael K., a highly regarded (and not very shy nor humble) professional photographer, to join us for the shot.

Both were eminently qualified and I had to choose.

“Underneath I have on only my summer clothes.”said Heather. “So, if I’m going to be in the picture, we better do it quickly.”

I summonsed to Michael. Let’s GO!

Finally, just as Michael finished staging us, my neighbor Chris runs over, and we quickly find a place for him.

Michael staged us and he took several photos. (Sister Jean never looked so good!) Cold and uncomfortable (especially Heather and Liz), we all quickly departed, and within a few hours Michael sent the completed picture to Walt, and I prepared the email to go out early the next morning, with Alderman Moore agreeing to send it out an hour later on Sunday morning.

Most of us know what happened on Sunday. At around 1:00PM a Channel 2 News cameraman shows up to video the beach. Chris approaches him.

Cameraman: “This beach is ranked as one of the best in the country? Does it get very busy in the Summer?”

Chris: (holding back laughter, and playing along.) “Oh yeah!”

Sunday night on Channel 2’s 10PM broadcast (and I’m told they did it at 5PM as well), the television station aired a brief segment showing “Rogers Park’s Jarvis Beach, ranked by Travel Advisor as the 12th Best Beach in the US, ahead of Santa Monica…”

Perhaps the highest levels of success when it comes to April Fools jokes is when even the media believes and covers it!

This past day, some folks have asked me if I thought CBS would post some sort of retraction, or at least fess up to their error - that they fell for an April Fools joke.

Can we consider this an example of “Fake News” - and shorn Channel 2 for their oversight?

Something happened on Saturday - something special - suggesting that when it comes to that which is most important - neighbors engaged in a special project; having fun; being part of a community – that those of us on Jarvis Beach on Saturday earned this ranking as a “Best Beach in the US.” We might not be as large as Siesta Beach in Florida; our sand might not be as pristine as that found on Ka’anapali Beach on Lahaina, Hawaii; but on Saturday, we on Jarvis Beach through our community spirit, good humor and zest justifiably assumed our #12 ranking.  Similar to Loyola given a chance to participate with the big time universities in the NCAA tournament, we at Jarvis Beach, relying our big time stars like Sister Boomer Jean, photographer Michael Kardas and clad in bathing outfits Heather and Kimberly, arose and we assumed our place as a deserving Final Four finalist!